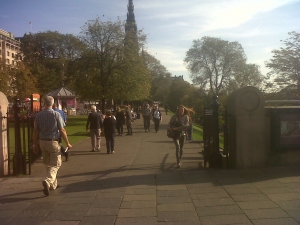 The latest figures released by Heart UK show that those living in the east – in Lothian, Fife and Tayside – have the lowest rate of coronary heart disease (CHD) in Scotland.

However, this does not exempt the fact that Scotland has among one of the highest rate of coronary heart disease in Europe.

The snapshot of Scotland’s health illustrates a significant east-west divide, with the chance of dying from heart problems in Ayrshire, Lanarkshire and Greater Glasgow strikingly higher than eastern counterparts, Tayside, Lothian and Fife.

The figures revealed that 71.39 people per 100,000 died from heart disease, in Ayrshire; compared with 45.33 people per head of the population in Fife.

The reasons for this are complex and varied. Naveed Sattar, professor of metabolic medicine at the University of Glasgow, sights that the levels of stress that people are experiencing during this tough economic time could play a significant role, as well as lifestyle and poor diet.

“For many complex reasons, individuals from poorer areas, particularly younger men, are generally less enthusiastic about engaging with the health profession and, therefore, far fewer have had their risk factors measured.

“The real future goals are to stop youngsters engaging in smoking in the first place, as well as an urgent need to improve early dietary behaviour to stem the well-documented but alarming rise in obesity levels, particularly in poorer parts of society.”

Today, the charity Heart UK is launching a campaign to persuade Scots to cut their chance of heart disease by leading healthier lifestyles.

However, members of the public, do not appear to be worried about their chance of being diagnosed with heart disease.

James White, from Glasgow, said: “There is enough to worry about without thinking about the chances of heart disease. We play the hand we’re dealt, everyone is struggling at the moment but we have just got to get on with it”.

He is not alone in point of view, research sponsored by MSD, revealed that 70 per cent of those surveyed were not worried about their hearts.

No incoming links found yet.